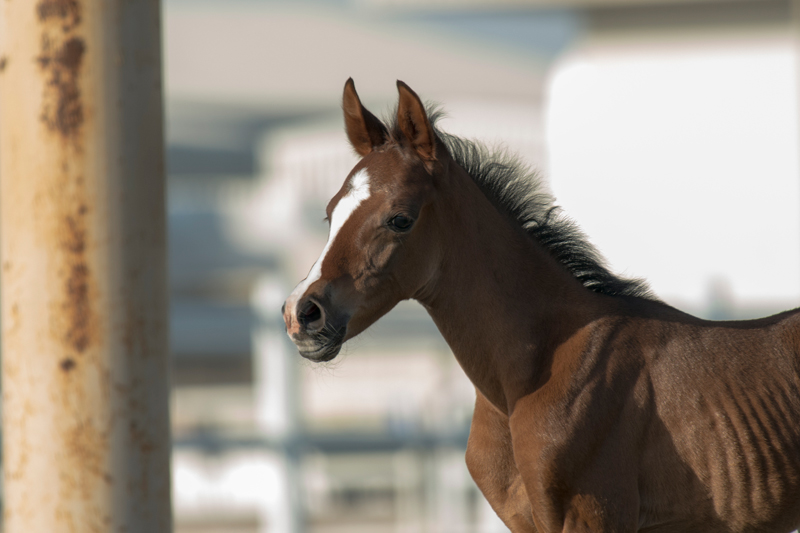 For those of you who are unaware of Forta, prepare to be amazed. Those of you who already know this mare are aware of the incredible influence she brings to every horse whose pedigree she appears in.

The ring of her name automatically brings to mind the word, “strength” and I can think of no better single word to describe Forta: structurally, genetically and reproductively. Structurally, Forta resembles a gazelle with substance. She was built for speed. Genetically, Forta is solely responsible for the survival of an entire female line: the Ukrainka. Reproductively, this mare astonishes by having produced a foal every year from the age of six (1949) until she was twenty-four, she then missed one year and had her last foal *Falat at the age of twenty-six (1969) which was the year before her death.

The fact that many of Forta’s offspring were prominent racehorses only adds more credence to the theory that speed is one of the most genetically transmittable traits. Every Forta offspring that started at the track (there were 18) became a winner and many were stakes winners. No other broodmare in the breed’s history can rival such a record, indeed, one would be hard pressed to find a Thoroughbred mare with any such similar speed producing record. Forta was and is a phenomenon.

Fascinating as Forta’s direct offspring are, the genetic strength of this mare carries through four and five generations today. It is a testimony to her that the best North American racehorses carry her blood and also some of the best showhorses. Following is a listing of the offspring Forta and some of their prominent descendants.

The first offspring of Forta is arguably her best, which in itself is noteworthy as many consider the first offspring of a broodmare likely to be inferior to its successors. He was the great racehorse and sire CZORT. Czort was sired by Wielki Szlem (which incidentaly translates into Grand Slam in English) and was born in 1949. Czort raced 4 years had 19 starts, 13 wins, 5 seconds and 1 third. He won the Criterium twice and 6 other Stakes races. he won at all distances and carried up to 146 pounds. Czort sired more classic (stakes) winners (he only had 47 get) than any other Polish stallion. Forta was often bred to strong race sires such as Wielki Szlem, and when she was the formula for speed was guaranteed. One famous son of Czort is *El Paso, a US National Champion and high seller at $1,000,000.00. *El Paso sired 11 National winners including US National Ch. Mare, *Wizja and Polish National Champion Stallion and undefeated racehorse, Europejczyk. Another son of Czort is *Sambor, a favourite of the Poles because of his quality and great heart for racing. In America, *Sambor became a National Champion Racehorse and a regional Halter and Park Champion. His son Samtyr is a leading racehorse sire and the sire of Tyrix who was the leading money winner in 1984. This carries the Forta influence through five generations! *Sambor is also the sire of SW Saruchna who produced the Double National Champion Stallion, MS Santana.

The second offspring of Forta was a daughter, born in 1950, DYSKA (also by Wielki Szlem). She is considered by many to be the best daughter of Forta. Dyska raced 2 years, had 9 starts, 4 wins, 1 second, and 2 thirds. Among her wins was the Polish Oaks. Her most famous son is *Dunajec who was the leading racehorse from 1967-1974 and is a top racehorse sire in North America. Dyska had 14 foals in Poland, 7 of which were race winners. A daughter, *Disna, went to the US where she produced 3 Champions, Dzina (Aus. Res. Nat’l Ch. twice), Kem Thunderbolt (halter and Park Ch.) and Daisy May (National Champion Western Pleasure).

Next, Forta was bred to Amurath Sahib to produce another great racehorse, EQUIFOR (1951). Equifor finished in the money in all 16 of his races and set the speed record for the Derby in 1955. The three top times for the Derby have all been set by horses closely related to Forta. Equifor is a full brother to Fortunka and Fortissima and a 3/4 brother to *Falat. A son of Equifor, *Majdan, gained some prominence as a sire of US Champions.

Following Equifor, Forta produced FORTISSIMA in 1952, a daughter also by Amurath Sahib. Fortissima raced 2 years, had 11 starts and 4 wins. Her full sister FORTUNKA (1953) became a Polish race winner and was exported to the US. A daughter, Fornarina, produced US and Can. Top Ten Mare and English Pleasure Champion, Fantazja+++, who in turn produced US Top Ten Futurity stallion, Freedom VF. In America, *Fortunka has produced 2 US Champions at Halali Arabians: Halali Fanfar & Halali Fantasia. A daughter of Fortunka, Halali Fiesta, is the dam of 2 National winners including Can. Top Ten Park horse, Firedanse, who in turn is a sire of National Champions in halter and performance. In all, Fortunka’s line is represented by 14 known North American Champions!

Following Fortunka, Forta produced in 1954 the black mare FORSYCJA. She is by Como, making her a full sister to *Fortel. Forsycja produced 2 race winners and *Felluka who produced *Cometera a halter champion and second highest seller at Scottsdale, 1989. Other daughters of Forsycja, Familia and Flotilla remained at Michalow Stud in Poland.

In 1955, Forta had the stallion *FORTEL (by Como). *Fortel raced 2 years, had 19 starts, 4 wins, 1 second, 5 thirds and is a Stakes winner. *Fortel has sired four national winners. They are, Can. Top Ten Pleasure Driving, Bur Misty, US Res. Nat’l Futurity Stallion EB Fortune , US Top Ten Forseyne and 12 time National winner, Forreal+/, Can. National Stock Horse and Working Cow Horse. *Fortel was still siring foals at age 34 though not standing to the public.

In 1956, Forta was bred to the stallion Doktryner to produce *FEREZJA. *Ferezja raced for 3 years, had 24 starts, 4 wins, 3 seconds and 5 thirds. She produced 2 race winners in Poland, Ferenike and Fenicja. *Ferezja is the dam of Top Ten Stock horse, *Feniks.

Forta was bred to Doktryner again to produce FERRUM in 1957. Ferrum was unraced but was a leading sire at Janow Stud in Poland. His exported daughter, *Schara, produced Scholom, a dam of champions.

In 1958 Forta was bred to *Nabor and produced *FAROAN++. He raced 1 year, had 6 starts, 2 firsts and 4 seconds. *Faroan++ became a National Top Ten stallion and an English Pleasure and Park Champion. He has sired three national winners and five producers of champions.

In 1961 Forta had the important daughter, FATMA. This was the only time Forta was crossed with the great race stallion Anarchista. Fatma is an Oaks winner, she raced 2 years, had 14 starts, 6 wins, 7 seconds, & 1 third. Fatma is a 3/4 sister to Dyska & Czort, and is the dam of Polish, European & World Champion stallion, *Fawor. *Fawor also won the Animex Cup race and is Region XIV Top Five Stallion. Poland leased *Fawor to Paramount Farm in the U.S. where he sired many champions but he is now back in Poland. Fatma also produced the mare Femina who is the dam of the stallion, *Finali.

In 1962, Forta was crossed with El Trypoli to produce *FARMACJA, who is a Polish race winner and dam of a champion producer, MHR Port Macja.

In 1964, Forta had a daughter by the excellent race sire Branibor. FORTUNATA raced 2 years, had 10 starts, 3 wins, 2 seconds & 1 third. Fortunata’s daughter, Forsa won the Polish Oaks & is a full sister to the stallion *Figaro who is also a stakes winner and sire of US Top Ten Park horse, *Nassar. *Figaro stands at Excella Arabians in Alberta.

In 1965 & 1966, Forta had 2 daughters by Czardasz. They were *FORTECA and *FORMOZA and of the same sire line as Dyska, Czort, & Fatma. Both mares were race winners & are full sisters to the stallion *Finisz.

In 1967, *FINISZ was born (by Czardasz). He is distinguished because he not only won the Polish Derby but became a National Top Ten English Pl. Ch. *Finisz raced 2 years, had 14 starts, 5 wins, 6 seconds, & 2 thirds. Amongst his wins were the Derby & Criterium. Unfortunately, *Finisz died in 1974 leaving only 15 North American get.

In 1969, Forta produced her last offspring, the stallion *FALAT. *Falat was sired by Gwarny making him a 3/4 brother to Equifor, Fortissima & Fortunka. *Falat won his only race in Poland before being imported by Sir William Farm. He then became an English Pleasure Champion but was stolen and went missing for some years. He now stands at Kaszmir Stud & Racing Stables in Alberta.

As you can see from the above information, Forta line horses compete not only at the upper levels of the race world but also the show world. In this research alone we find 48 race winners and 56 Show Champions. It is safe to say that Forta ranks among the greatest Polish Arabians of all time. No other mare has single handedly rejuvenated an entire family line and founded a lasting dynasty in quite the way that Forta has. In short, Forta is truly a phenomenon and the breed continues to benefit from her immortality.

Bibliography: “A Photographic History of the Polish Arabian”
by Gladys Brown Edwards

“The Breeding of PureBlood Arabian Horses in Poland”
by Roman Pankiewicz